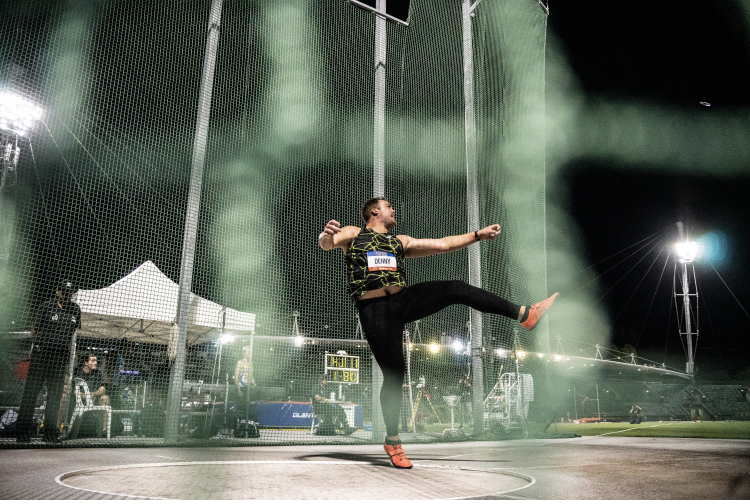 Photos by Flynn Hopkins for Inside Athletics

Denny returned to competition for the first time since his fourth place at the Tokyo Olympics and showed he is in strong form with a 64.64m throw, finding an extra gear to claim the meet record.

“I was in the third round and got so close to that meet record (64.23m). I thought, well, I was short at Tokyo and I don’t want to relive that so I found that extra gear. That’s my mantra this year – to find another gear when I need it,” Denny said.

“I’m also really proud of where I’m at for my first throw of the season. Considering the way I started in the year leading into Tokyo, I’m metres ahead and uninjured. I look back at last season, and just before I did my rib injury, I was throwing 66m in in training and that was a good indicator, but I went back to 53m when I got injured, so to get back up to 67 in four months shows that I’m consistently improving.

“It’s a really good start. I didn’t have expectations for tonight given I’m in a heavy training load so I’m looking forward to what’s to come ahead of World Championships in Oregon and the Commonwealth Games in Birmingham.

“About five laps in, I was feeling great. I was with the guys I look up to, so it was a great experience. Just being shoulder to shoulder with them is an unreal experience. So to do that and take the win at these Championships makes me look forward to what is ahead,” Thomas said.

“There was so much pushing and shoving in the race; I wasted so much energy trying to hold my place. I’m not used to that type of racing. I’m used to consistent pace where we are out there for a lot of laps so we can settle, but I held my nerve, so I’m really happy with the outcome,” Davies said.

“I knew that if I wanted to beat some of the girls here, I had to go hard from a long way out. Jenny has such a good kick, and Nat too. My plan was to go from a long way, which is different for me, but I’m glad I can show myself that I can do that.”

Bendere Oboya made it two-from-two in her step up to the 800m, winning in a new personal best of 2:01.92 after a fast opening lap. Claudia Hollingsworth was second in 2:02.34 in a race where seven women broke 2:04.