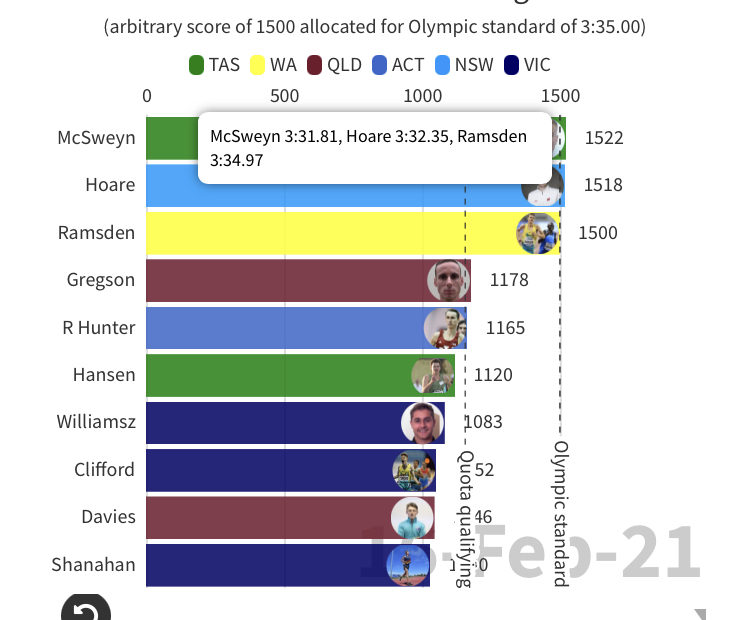 The race for Australia’s three Olympic 1500m berths is on!

Only once in the history of the Games has Australia had three competitors line up on the start line in the men’s 1500m. It was over 60 years ago… on that occasion, in Rome in 1960, Herb Elliott took gold in world record time. Australia’s other competitors were Merv Lincoln (7th in heat, 3:46.8) and Albie Thomas (5th in heat, 3:46.8).

Since then, Australia has had only two finalists in the event: Graham Crouch in 1976 and Ryan Gregson in 2016.

We look set to have a full contingent of athletes come the Tokyo Olympic Games. However, it has been the most unusual of qualifying periods, with the potential for many more twists and turns over the coming months:

How do athletes qualify?

We’ve written previously in some detail about the intricacies of the Olympic qualifying process. But briefly, athletes can qualify by running faster than the 3:35.00, or being one of the next top athletes in the World Athletics Rankings, to fill the 56 person quota for the event.

But only three athletes per nation can be selected. And such is the depth of Australia’s 1500m stocks at the moment, it means high quality athletes will miss out on selection.

Who can be selected?

There are three athletes who have met the qualifying time so far:

The World Rankings needed to be eligible to qualify via quota is a moving feast. At the time of writing 1158 points scores the last quota spot, but this will be highly volatile right up to, and even after, the qualifying period ends on 29 June 2021. Factors that will affect it include:

If the quota cut-off remains at 1158 points, Ryan Gregson (1178 points) and Rorey Hunter (1165 points) would be eligible for selection, if their scores remain as is.

The below will give you an idea of how volatile the rankings have been during the qualifying period.

Click the reset button above to watch the visualisation

Who else could qualify?

During the qualifying period Jordan Williamsz (high: 1175 points) and Luke Mathews (high: 1180 points) have had World Rankings scores that would make them eligible for a quota place. Williamsz currently has a score of 1083 points, while Mathews doesn’t have a World Ranking, having not raced the minimum five times over the past 12 months of the ranking period (in fact, he hasn’t raced over 1500m since 30 July 2019).

The minimum of five performance is something that leaves a number of athletes off the list at the moment, but which could easily change in comings weeks and months. Clearly Charlie Hunter has the basis for a very competitive ranking, off the back of his two Australian indoor mile records of 3:53.49 and 3:54.54 over the past month. With a 3:36.94 1500m en route to his latest record, the qualifying standard is clearly also within reach.

That’s the clearest pathway – running under 3:35.00 – to be eligible for selection, but for context for the many other athletes recording respectable times currently (Hunter was one of five Australians to break four-minutes for the mile, indoors, last weekend), an 1158 point ranking can be achieved through the combination of any five of the below performances in winning the types of meets most accessible to Australians:

Other athletes we haven’t already named, who have run under 3:40 since 2018 are:

What is the selection criteria?

Athletics Australia’s Nomination Criteria is available here. Athletics Australia nominates athletes to the Australian Olympic Committee, who select the team. In theory, the AOC should rubber stamp AA’s nominations, but there’s been a number of high profile circumstances in the past where that hasn’t been the case. But let’s hope/assume all of that is history.

So presently, if McSweyn, Hoare or Ramsden win nationals, they are automatically nominated. The same would occur for any other athlete that betters 3:35.00 prior to, or during, a nationals victory. That nomination will occur soon after the Australian Championships.

Otherwise, if the winner of nationals doesn’t have the 3:35.00 entry standard at the time, they can be selected at the end of the qualifying period at the discretion of the selectors, provided they are eligible for a quota position.

The second and third places on the team are at the discretion of the selectors, from among qualified athletes at the close of the qualifying period.

What is selector’s discretion?

The most debated concept in Australian athletics.

Relevant bits of the Nominations Policy are the aims of the policy and the factors that must be considered by the selectors.

Aims
The aims of AA’s Nomination Criteria Policy (Aims) are to nominate Athletes:

(a) to form the most competitive possible athletics team to represent Australia at the Games; and

(b) that AA considers:

The Selection Committee will make their decision… on a case by case basis, having regard to:

(a) the Aims of this Nomination Criteria Policy
(b) world ranking lists;
(c) previous Olympic Games and World Championships results;
(d) repeat performances at or near the WA Entry Standard;
(e) finishing position at the Australian Championships;
(f) head-to-head record within the Qualification Period, particularly at the Australian Championships;
(g) other relevant head-to-head performances;
(h) performances against other Athletes;
(i) previous championships records which may include any WA championship, Olympic Games and Commonwealth Games;
(j) current form and fitness; and
(k) any other factor the Selection Committee considers relevant.
For the avoidance of doubt, these matters are not listed in order of priority

So what about Ollie Hoare?

There’s been much speculation and insinuation about Ollie’s Hoare eligibility and/or likelihood of selection, following his Australian Indoor 1500m record of 3:32.35 last weekend. Like this tabloid piece. Before we get into that, a brief tangent…

The following are objectively true:

The following require some more subjective judgment be applied:

That’s not to take anything away from Ollie Hoare, he’s a fine athlete and his run was obviously a quality performance. It will be exciting to see what he can run outdoors in the coming months.

So can Ollie be selected?

The point of contention is that Ollie doesn’t want to return to Australia to run the national championships. It is understandable, given the quarantining arrangements that would be required – being stuck up in a hotel room for two weeks.

That being the case, Ollie can’t be automatically selected, because he can’t win nationals.

However, he can still be selected based on the discretion of the selectors, like any other athlete that doesn’t win nationals. Obviously, there’s a few areas that the selectors must consider as part of their discretion (such as finishing position at nationals and head-to-head performances at nationals) that won’t be to Ollie’s benefit. But let’s face it, the discretion is drafted to be as broad as possible, so there would be a strong case for his selection.

If you’ve got this far, you must really love the 1500m and/or analysis. So we’ll leave you with a visualisation of the movements in the Australian all-time list for 1500m, starting with John Landy.

Click the reset button above to watch the visualisation

All of the above wouldn’t be possible without the excellent historical records kept by World Athletics, and in particular, by a group of Australia statisticians including Paul Jenes, Peter Hamilton, David Tarbotton, Fletcher McEwen and Bert Gardiner. If you want to down a rabbit hole of Australian athletics statistics, check out http://athletics.possumbility.com/