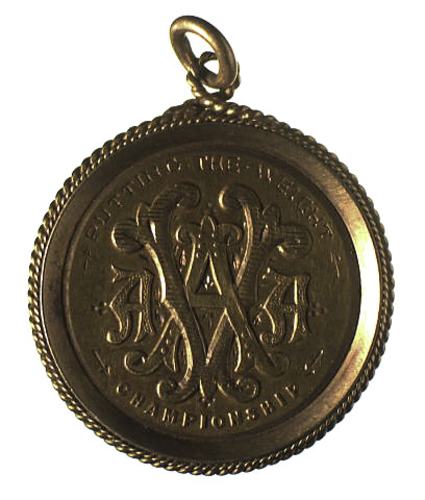 Word by Tim McGrath. Cover image of a medal from the 1899 Victorian Championships, courtesy of Museums Victoria.

There aren’t many athletics championships that can claim they pre-date the Olympic Games. The Victorian Championships, first held in 1892, is one that can.

The first Victorian Championships held at the East Melbourne Cricket Ground in 1892 were a male only affair, held under the auspices of the Victorian Amateur Athletics Association. It wasn’t until 1931 that women competed, via a separate championships conducted by the Victorian Women’s Amateur Athletics Association. The Poplar Road Athletics Track at Royal Park that hosted the meet  – the first cinders track in Australia – was a pioneering facility that provided an environment for the participation and success of female athletes. It was used until the early 1970s, when the women’s championships slowly began integrating with the men’s (initially for the finals only, with heats having being run at different venues the weekend prior). By 1983, once the VAAA and VWMAAA had merged to become the organisation we now know as Athletics Victoria, the events were fully integrated at the same venue, Olympic Park.

A variety of other venues have played host to the Championships, including current home Lakeside Stadium, to St Kilda Cricket Ground (Junction Oval), Aberfeldie, Duncan Mackinnon, Mentone, Sandringham, the MCG (including in 2006 when hosting the test event for the Commonwealth Games) and Ballarat City Oval (which perhaps makes Ballarat’s Mars Stadium – the current likely choice as the 2026 Commonwealth Games venue – not without some history, albeit the Victorian Championships were last held in Ballarat in 1896!).

What better way to take a look back at the history of the Victorian Championships than via the blue ribband event of the 100m?

Well, that’s not without some challenges, with the event only being conducted as a staple within the program of main men’s championships since 1971, when it replaced the 100 yards. The 100m had earlier been infrequently conducted as a separate championship event at a separate meet, much in the same way as the 100 yards continued held separately throughout the 70’s and 80’s once replaced on the main program.

Perhaps not surprisingly, the women’s association were more progressive, adopting the 100m as its main championship event in 1967 – the first full year after Australia shifted to decimals on the 14 February 1966. For the below only the main event held at the Victorian Championships is counted within the statistics.

Closest race: 1900, a dead-heat between William Shea and George Moir.

This year’s Victorian Championships starts on Friday 18 February, at Lakeside Stadium. The event is held over two weekends, with the 100m finals taking place on Saturday night. We will be there to provide photographic coverage. Event information is available here from Athletics Victoria.

Historical result info for this article with thanks to Athletics Victoria’s archives.