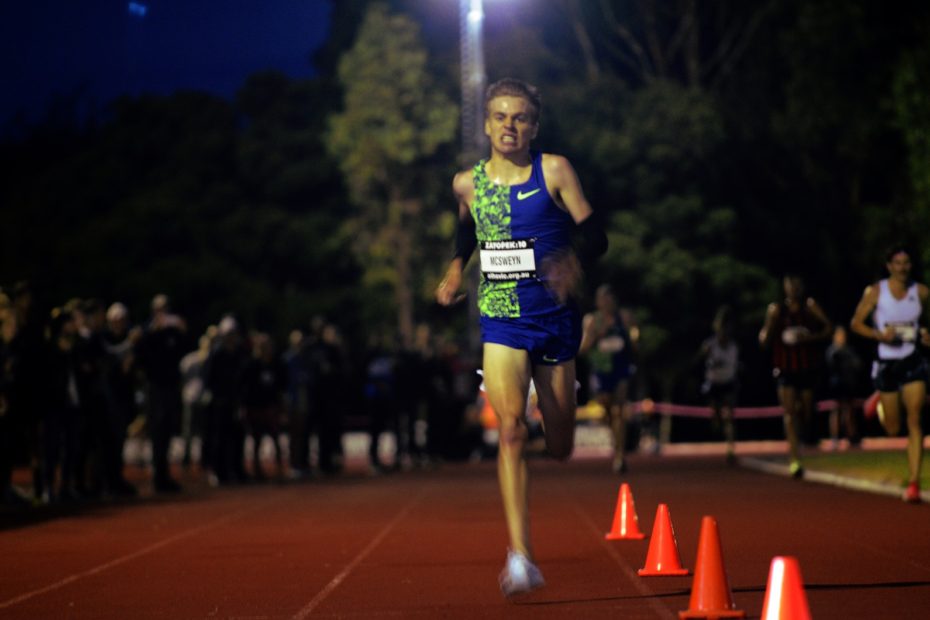 Stewart McSweyn recorded his third straight Zatopek win, kicking away from Patrick Tiernan over the final lap to set a new national record at the 2019 Zatopek:10 meet.

The ‘King of King Island’ had patiently and smoothly followed the metronomic early pace of around 2 minutes, 45 seconds per kilometre around the Box Hill Athletics Track in suburban Melbourne, before unleashing a 2 minute, 35 second final kilometre to stop the clock at 27:23.80.

“I’m kind of leaving it all open,” McSweyn said.

“I’m just going to wait and see what I think is my best chance because I was in the 5000m final in Doha and I want to go further than that next year.

“I want to try and be the guy who competes for medals.”

Best known over the steeples, Gregson (nee Lacaze) is hoping to add the 25 lap event to her repertoire for Tokyo. Last night she bided her time, outkicking Canadian Andrea Seccafien down the home straight, with Brichacek third (32:57.58) and Rose Davies taking the bronze in the national championships (33:25.52).

“It was a very relaxed tempo for most of the race, which could only fall into my hands,” Gregson said.

“I was never going to lead. My tactics were stay as far away from the front and leading as possible and just make sure you’re there with the last k.

“Luckily for me I had people like Emily working so hard and keeping the pace reasonably honest to get rid of a few kickers and it just couldn’t have worked out any better.”

After a lacklustre early pace NSW’s Luke Young was rewarded for taking up the running in the de Castella junior 3000m, taking victory in 8:19.06 from Western Australia’s Ky Robinson and South Australia’s Isaac Heyne.

Victoria’s Heidi Demeo waited patiently to make her move in the Ondieki junior 3000m and was a convincing winner by almost five seconds from Queensland’s Nikita Moore, with Juliet McBurney third. Demeo ran 9:34.32.

The Victorian 4x400m titles were held in conjunction with the meet.

There was a similarly close finish between Glenhuntly and Geelong Guild in the mixed U18 4x400m, with Glenhuntly’s Seb Hadaway holidng off Caleb Morrisey on the final leg for a 3:39.60 win.

Sarah Billings sprinted home for a win in 4:24.53 in a tactically run 1500m, while in the men’s race Queensland’s Callum Davies timed his sprint home to perfection, taking the scalp of three-time Olympian Jeff Riseley, in a time of 3:43.51.

A general view of Hagenauer’s Reserve at Box Hill, which played host to the 2019 Zatopek:10 meet.

Our full collection of photos from the 2019 Zatopek:10 meet are available here.