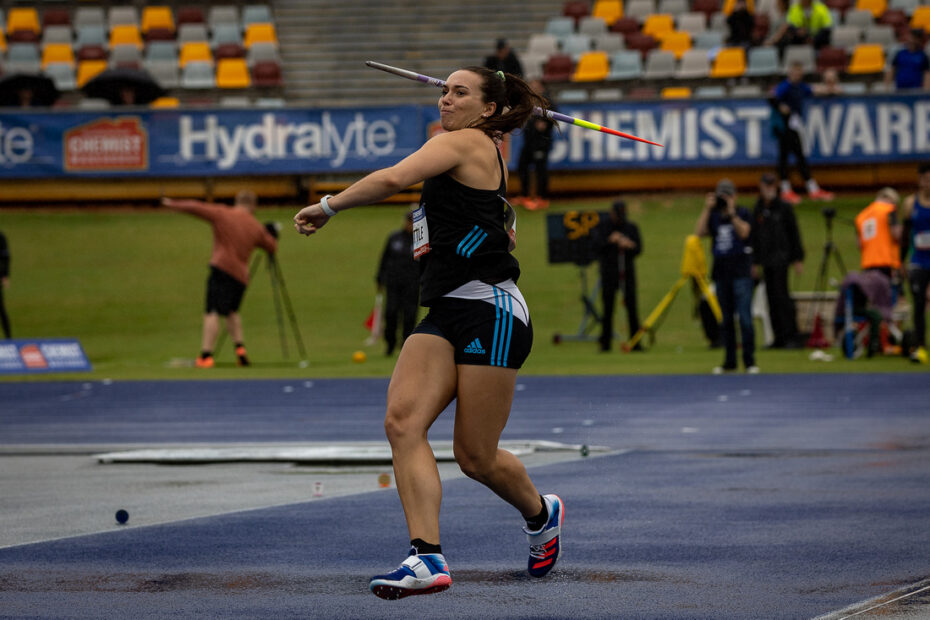 Photos by Michael Thomas for Inside Athletics

“I’m really excited with how I competed today despite the conditions,” Little said, of the wet Brisbane track.

“I want to be there at all the major finals and to be throwing like I did today, so I’m just excited that on any day I can come out and do my best,” Little said.

Despite not having the world championships qualifying standard of 64.00m, Little is a virtual certainty to qualify by her World Athletics Ranking,. Her domestic season also included:

The rain soaked track and weaker than possibly fields took some of the shine off the meet, which had in recent years been the pinnacle one-day meet on the domestic calendar. Nonetheless, a star of the future in Torrie Lewis shone brightly, capturing the 100m/200m sprint double.

“I definitely want to make the final in both events (in Colombia) and depending on how I am with my form, hopefully be in medal contention.,” she said.

Erratic winds prevented the possibility of a new personal best for national champion Jake Doran, with the men’s 100m enduring a 1.5 m/s headwind, despite the direction of running being reversed and previous races having a tailwind. Doran took line honours in 10.28 seconds, ahead of New Zealand’s Edward Osei-Nketia (10.3) and Jacob Despard (10.41).

“This is where it starts, you have to win races here to be able to go out there and win overseas. Brisbane is one of my favourite places and it’s nice to be back in Australia racing again, in a month’s time we are back overseas,” Bol said.

“I didn’t really worry about the conditions. Rain or not, wind or not, I came out here and treated it as a training session – that’s when you run the best. Conditions weren’t ideal but race-wise it was ideal,” Bol said.

Training partner Bendere Oboya overcame the disappointment of being knocked out in the heats at the Australian Championships, with a front running victory in 2:03.10 ahead of Tess Kirsopp-Cole (2:03.15) and Sarah Billings (2:03.50).

Chris Mitrevski leapt to 8.06m (+0.8) in the long jump, securing valuable World Athletics Ranking Points, which will be relevant for world championships selection should he not meet the 8.22m qualifying standard (he jumped a wind-legal 8.21m at nationals).

Christopher Douglas produced a new personal best over the sprint hurdles, claiming the scalp of national champion Nick Hough in the 110m hurdles. Douglas clocked 13.65 seconds to Hough’s 13.68 seconds, run into a 0.4 m/s headwind. The performance rockets him to 7th on the Australian All-time list.

Check out a gallery of over 400 photos from the meet, courtesy of Michael Thomas. >> Photo Gallery.