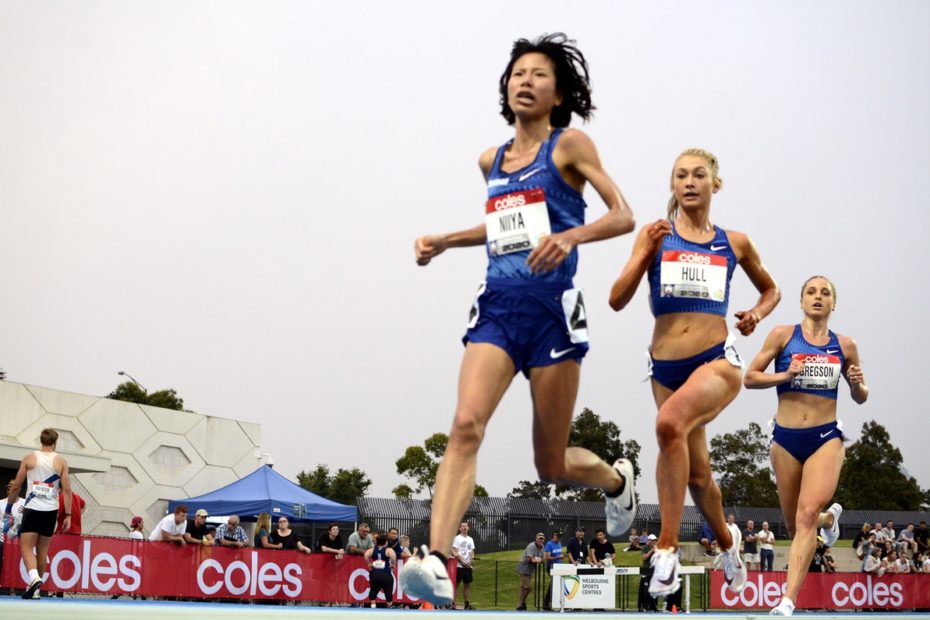 Jessica Hull and Stewart McSweyn were a class above the rest of the fields in the Australian 5000m championships, held at the 2020 Melbourne Track Classic.

Off the back of setting the Australian indoor 1500m record in the past fortnight, Hull showed the field a clean pair of heels over the final kilometre to record a swift 15:06.12.

The early pace had been pushed by Japan’s Hitomi Niiya, with a pack of four including Hull, Zatopek winner Genevieve Gregson and national 1500m record holder (outdoors) Linden Hall separating from a large second pack.

Hall was the first to falter, and tired in the closing stages to finish fifth in 15:25.22. But it was the move made by Hull with a lap and a half remaining that was definitive.

“I couldn’t tell how quick the last 600m was, I am really bad at looking at screens when I race and I couldn’t hear my assistant coach (Dad) on the sidelines, but at the 600m I felt good, so I just went for it,” Hull said.

Already out in front, she kicked again with 400m left and secured the win, talking about the second kick – she said:

“It’s something you learn when racing internationally, the women over there don’t just kick once, they kick two of three times – so I think the more times I can practice it the better I will be for it.”

Niiya was second in 15:15.41 with Gregson claiming the silver medal in the national championship in 15:20.60 ahead of a fast finishing Jenny Blundell (15:22.14), who took more than half a minute off her personal best for the distance.

After a slow early pace in the men’s race, Stewart McSweyn put on a world class display over the final five laps to take victory by 10 seconds in 13:38.77. The final 2km was reportedly covered in a little over five minutes.

Following McSweyn when he made his move was a courageous run from Sam McEntee. A steamrolling Matthew Ramsden ran him down in the home straight in the fight for the minor medals, 13:48.67 to 13:49.28.

“Because there is no pacers, I knew it was going to be a lot slower but I have shown that I can run well in a fast race at Zatopek and can run well tactically as I did tonight, this is important because at Olympics you just don’t know what kind of race you’re going to get and I need to have both abilities if I am going to medal,” said McSweyn.

The breakthrough performance of the night was a win in the 100m hurdles from Liz Clay, who ran 12.94 seconds (+0.6) to rocket to fourth on the Australian all-time list. Clay defeated reigning national champion Celeste Mucci, who ran a credible 13.20 seconds for second.

Early in the meet Bendere Oboya ran a smooth race to dominate the field in the 400m, winning by over a second-and-a-half in a season’s best 52.06 seconds.

Matt Denny showed the consistency that saw him win the World University Games and finish sixth at last year’s World Championships, throwing over 60 metres on three occasions with a best of 64.22m.

Elsewhere in the field, Julian Konle hop, stepped and jumped out to 16.66m (+0.7), moving to 11th on the Australian all-time list with the best performance recorded by an Australian over the past seven years.

Damien Birkinhead sent the shot out to 19.67m to hold off the challenge from New Zealand’s Ryan Ballantyne, who threw 19.37m.

A front running performance from Lauren Reid was rewarded with victory in the 1500m in 4:16.52.

Full results of the meet are available here.

Full photo gallery from the meet is available here