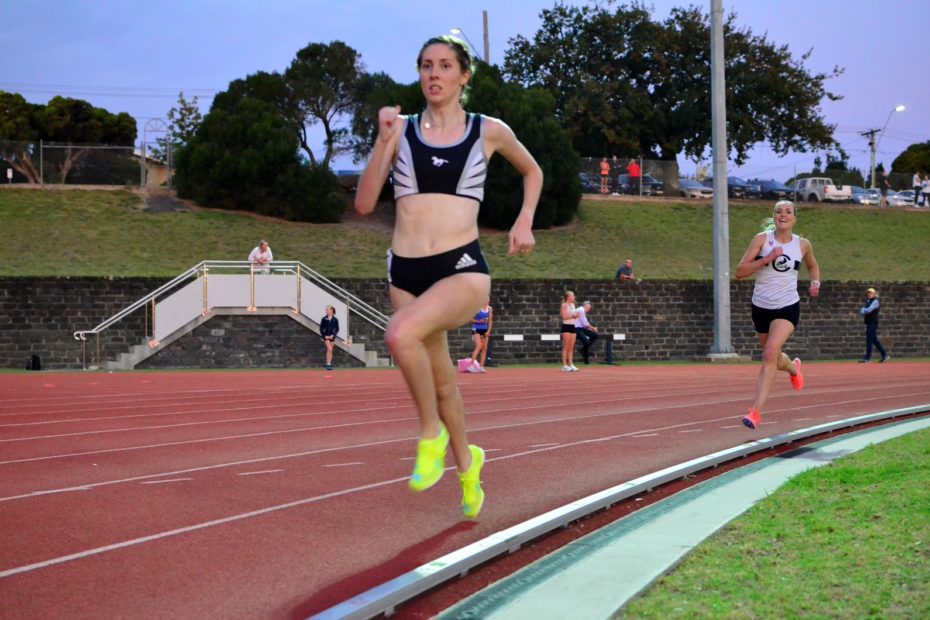 World championship and Commonwealth Games representative Georgia Griffith made a successful return to the track following injury, convincingly taking out her event at the Victorian Milers Club meet #5 at Duncan Mackinnon Reserve.

Griffith followed the early pace through the bell in the women’s A 800m race before convincingly running away from the field over the final lap to record a hand-timed 2:02.5.

Griffith is poised for Olympic selection in the 1500m based on her World Athletics Ranking. 45 athletes will form the field for the event in Tokyo, with 25 athletes, including Australia’s Jessica Hull and Linden Hall, having recorded the qualifying time of 4:04.20. Griffith is currently ranked 5th in the World Rankings of those athletes who have not run the qualifying time, or 30th overall.

Byron Bay’s Elliott McGaughran ran a shrewd race to take victory in the men’s A 1500m. The 19-year-old made his way through the field as part of the chase pack after the early leaders passed the first lap in 56 seconds. Sprinting for home, McGaughran took victory in 3:44.24 from Tom Thorpe (3:45.08) and Matthew Hussey (3:45.20).

In the women’s 1500m Georgia Hansen and Madeleine Murray broke away from the rest of the field, with Murray too strong over the final lap. She took victory in 4:16.00 to 4:16.84.

The meet wasn’t all about elite and sub-elite performances. Far from it, with over 400 entries across 33 races, middle distance runners young and old were in action. Amongst them was 69-year-old John Bermingham. A 13:35 5000m runner in his prime, the retired Northern Territory school teacher will be chasing the 70+ world records in the 1500m and 5000m later in the year when he is age eligible. Last night, he clocked 4:58.5 to finish 10th in the Men’s J race.

Full results of the meet are available via Athletics Victoria’s Results Hub.

Gallery of photos available here. Full gallery of close to 100 photos will be uploaded over the weekend.