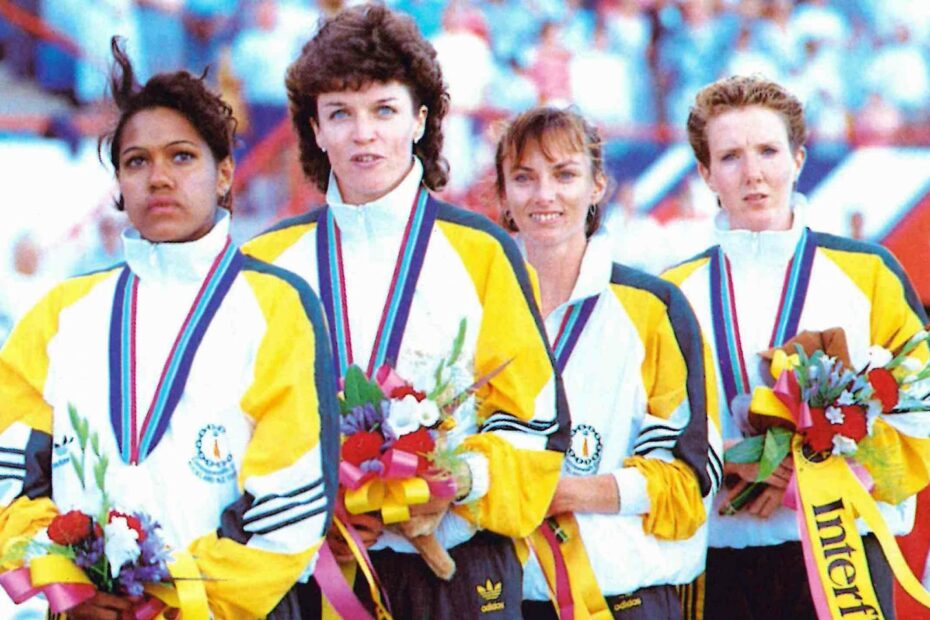 Have a look back at some of the athletes who would come to define Australian athletics in the decade leading into the 2000 Sydney Olympics.

They are some of the biggest names in Australian athletics, who set the domestic athletics scene alight during the 1990s in the then booming grand prix series.

They were also all members of the Australian team for the 1990 World Junior Championships in Plovdiv, Bulgaria.

Let’s look further at the team and the success that they have had on the track & field, and beyond.

An icon of Australian sport and global athletics. Won the Olympic gold medal over 400m with the weight of a nation on her shoulders in Sydney, in a moment that united the country like very few in its history. Add to that two world titles and a Commonwealth Games 200m/400m double where she famously carried the Aboriginal flag on her victory lap, Cathy’s laid back charisma is as enduring as the fierceness of her performances on the track.

Cathy had already shot to prominence in 1990, as a shy 16-year-old schoolgirl that was part of the winning Australian 4x100m relay team at the Auckland Commonwealth Games, held in January. Come the August’s world juniors, she lined up over 100m and 200m. She was fifth in the 200m and made the semi-finals of the 100m, while the 4x100m team finished fifth.

Still the Australian record holder (equally now with Brandon Starc) with a lofty personal best of 2.36m, the lanky Victorian had early career success as a bronze medalist at the 1992 Olympics. A bronze medal at the 1997 world championships, and a gold and bronze at the 1994 and 1998 Commonwealth Games were his other international medals. His national record was set in winning the 1997 Australian title that the rarified atmosphere of Melbourne’s former Olympic Park provided when full.

In Plovdiv at the 1990 World Juniors, his first appearance in the green & gold, Forsyth won silver with a jump of 2.29m.

Olympic bronze medallist in the 20km walk in Athens in 2004 which served as redemption for the sporting tragedy of being disqualified in the Sydney Olympics as she entered the stadium in the lead: a poignant moment that highlights that it is not just triumph that makes the Olympic Games special.

Saville also won three successive Commonwealth Games gold medals, including in Melbourne in 2006 when she was joined on the podium by her younger sister, Natalie.

In her first international competition, the 1990 World Juniors, Saville finished 13th in a field of 29 in the 5000m walk.

Another proud indigenous athlete, Kyle Vander-Kuyp redefined Australian men’s sprint hurdles over this career, lowering the Australian record from 13.55 seconds to 13.29 seconds, set at the 1995 World Championships in Goteborg, where he was a finalist. He also made the Olympic final in 1996 and was a semi-finalist in 2000.

As an example of his ability to peak for the right occasions, consider these two series of runs at the 1995 World Championships and 1996 Olympic Games, where there were four rounds of competition:

Post retirement, Vander-Kuyp continues to make an impact on Australian society as CEO of the Killara Foundation, which assists Aboriginal & Torres Strait Islander people to have sustainable employment, and as a member of the Australian Olympic Committee Indigenous Advisory Committee.

A three-time Olympian, with a best performance of 5th over 200m in front of her home crowd at the Sydney Olympics, Melinda Gainsford-Taylor won five national 100m/200m doubles throughout her career. Her crowning performances on a global stage was a world indoor title over 200m in 1995, after having won silver in 1993, while she was also a bronze medalist in the 4x400m at the 1995 world championships.

At the World Juniors in Plovdiv, Gainsford-Taylor was a semi-finalist in the 100m and 200m.

Australian record holder in the 400m hurdles with a sensational 48.28 seconds run in the semi-final of the 1996 Olympic Games. He was just two-hundredths-of-a-second slower in the Olympic final, where he finished fifth – the highest ranking male track performance at the Olympics since 1968, until Peter Bol finished fourth in Tokyo.

Robinson won gold in the 400m hurdles and bronze in the 4x400m at the 1990 World Juniors in Plovdiv.

Add to this list Olympians and Australian record holders Damien Marsh (10.13 in winning the 100m at the IAAF Grand Prix Final in 1995), Renee Poetschka (50.19 on a windy day at the Australian Championships in Sydney in 1994) and Andrew Currey (86.67m javelin in 2001) and it was clearly a talented cohort of athletes.

The impact of the team also wasn’t just on the track and in the field. Consider the talents of:

Lisa-Marie Vizinari – Commonwealth Games gold medalist in the discus as a junior in 1990, when she also won World Junior silver. Was a two-time Olympic finalist, before becoming a Heavyweight World Champion boxer after retiring from athletics.

Simon Hollingsworth – following his career as a dual Olympian in the 400m hurdles, and after being a Rhodes Scholar, Hollingsworth established a distinguished career in the public service, including as CEO of the Australian Sports Commission from 2011 to 2016. Hollingsworth won a bronze medal at the 1990 World Juniors in the 4x400m.

Paul Greene – an Olympian over 400m in Atlanta and with a personal best of 45.16 seconds, Greene has forged a career as an independent musician. Greene was a member of the bronze medal winning 4x400m team at the 1990 World Juniors.

Dr Sophie Scamps – 800m runner who after stepping off the athletics track established a medical career, with university qualifications from Sydney University, Royal College of Surgeons in Dublin and Oxford University. Is now running as a high profile independent in the upcoming federal election in the seat of Mackellar, which takes in the northern beaches of Sydney. Scamps was a gold medallist at the 1990 world juniors in the 4x400m team.

The 60-strong team is the largest ever, and each have a $5,500 levy to pay later this month to secure the right to wear the green & gold. A Go Fund Me fundraiser has been set up to support the team.

DONATE TO THE TEAM HERE