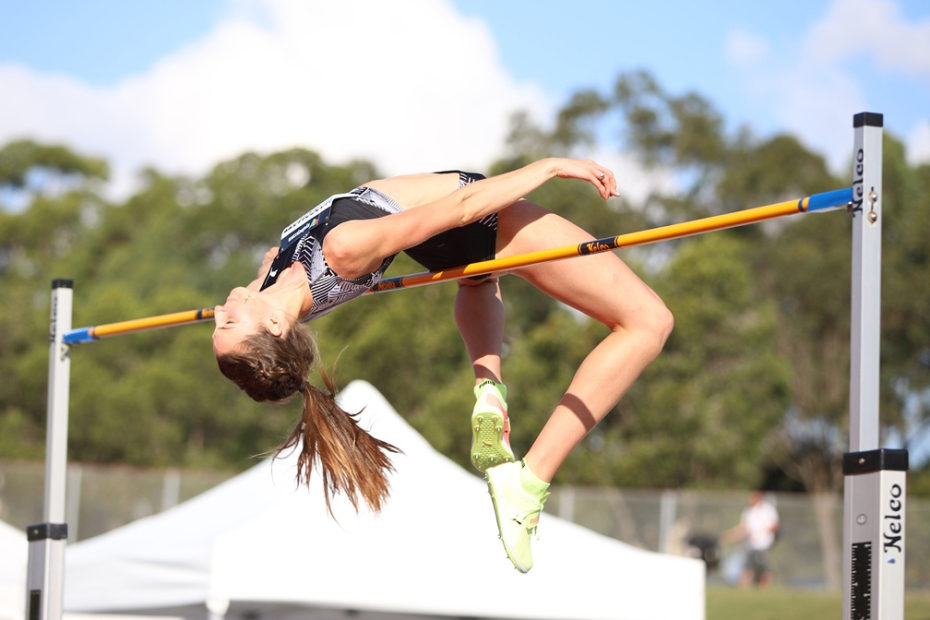 The performance won the 24-year-old the Betty Cuthbert Award for the outstanding performance of the meet, which doubled as the Selection Trials for the Tokyo Olympic Games. It was a stellar performance, amongst many memorable ones.

With Tokyo qualified Eleanor Patterson, the former national record holder at 1.99m, not competing, McDermott entered the competition with only silver medallist Emily Whelan still in the competition, at 1.86m. She cleared each height on her first attempt up to 1.97m – over the Olympic qualifier that she had already bettered on a number of occasions. From there, the bar moved to the magical 2 metre barrier, which separates good from great jumpers; competitive athletes, from global medal threats.

The first attempt was solid, but not successful. The second… successful, with the elation at the breakthrough evident on McDermott’s face as much as it was from the crowd’s reaction.

The nature of horizontal jumps is that everyone ends in failure… for McDermott it was three attempts at 2.03m, but the competition on the biggest day in Australian domestic competition sets the scene for the Central Coast native to take on the world in Tokyo in under 100 days time.

The performance also locked in Olympic selection for McDermott, one of a eleven athletes who did so over the championships by winning and having the Olympic Qualifying mark in their possession.

Most had the qualifier in their back pocket before coming to Sydney – national pole vault record holder Nina Kennedy the most prolific (as she seems to have reached the 4.75m mark almost every time she stepped on the runway this season). But the most emphatic addition came in the men’s 1500m, with Jye Edwards running a meet record of 3:33.99 to run his way onto the team for Tokyo.

The postponement of the Olympic Games from 2020 to 2021 has meant a number of things. But most fundamentally, it means that some athletes who would not have been Olympians last year, will be this year (and disappointingly for some, the converse is also true). Had the Olympic Games been run in 2020 it would have been very likely that Stewart McSweyn, Matthew Ramsden and Ryan Gregson would have been Australia’s three representatives. Jye Edwards, with a 3:41 personal best from 2017, wasn’t in the picture. The NSW born, ACT based athlete has now gained selection for Tokyo. He has been the form athlete of the domestic season, but nominally national record holder McSweyn was the favourite to take out the national title. In part thanks to McSweyn’s brave front running, Edwards has leapfrogged all before him for Olympic selection.

“I just made that split second decision to go after Stewy and I’m so happy it paid off,” Edwards said after the race.

The race was fast from the outset, with McSweyn and Edwards breaking away from the rest of the field. They covered the first 800m in 1:52 and the only question was firstly, whether Edwards would hang on and be pulled through under the 3:35 qualifying mark; and then secondly, when he was still there over the final lap, could he take the win? The answer was affirmative to both, passing the Tasmanian in the home straight to move to ninth on the Australian all-time list, in a meet record. McSweyn finished second in 3:34.55, while Rorey Hunter took bronze (3:37.32) ahead of two-time Olympian and former national record holder Gregson (3:37.84), with Olympic qualifier Ramsden sixth in 3:38.57. It all makes Australia’s selections for the Games even more intriguing, with 3:32 indoor qualifier Ollie Hoare choosing not to run the National Championships.

From talented to world class in the past year, Ashley Moloney took out the national Decathlon crown ahead of training partner Cedric Dubler. Moloney’s 8284 points was the second highest of his career behind the 8492 points national record he set back in December and bettered the track record that Dubler set in 2016 to record his maiden Olympic team selection. Dubler recorded a class 8175 points for second.

On his home track Rohan Browning showed his absolute dominance over Australia’s 100m men, taking victory in 10.09 seconds. His runs of 10.18 seconds in the semi-final and 10.39 seconds in the heats were also faster than anyone in the field could muster, except for second placed New Zealander Edward Osei-Nketia, who was second in the final in 10.31 seconds.

National long jump record holder Brooke Stratton had a very secure World Ranking path to Olympic selection, but not the qualifying mark that would gain automatic selection. That’s no longer a worry, with a 6.84m fourth round jump surpassing the mark and taking victory, and with it, automatic Olympic selection.

In the women’s middle distance races it was national record holders Catriona Bisset and Linden Hall who cemented their places in the team with wins in 2:00.45 and 4:07.56 respectively. Just as excitingly, talent that will evolve over the next Olympiad took silver in each event, with 15-year-old Claudia Hollingsworth kicking home in 2:01.75 and Abbey Caldwell running a sub-64 second last lap for a new personal best of 4:08.67.

Riley Day showed the field a clean pair of heels in the 200m, clocking 23.43 seconds on the same track that she recorded her Olympic qualifying mark and personal best of 22.77 seconds. Bendere Oboya did likewise in the 400m, with victory in 52.20 seconds off the back of her Olympic qualifier from the 2019 World Championships.

In the field, Dani Stevens took out another national title – her 16th in the discus, with a throw of 62.74m – and locked in selection to her fourth Olympic team. In second, Taryn Gollshewsky set a new personal best of 61.05m and strengthened her World Ranking and prospects of Olympic selection.

All other winners or places at Nationals now rely on the discretion of selectors to gain their place in the team. There were some performances that will make a mark in the selectors minds, as well as gaining valuable World Athletics Ranking points needed for selection in quota positions. We’ll break all of that down in a separate article later in the week, but the following were particularly noteworthy.

Victoria’s Hana Basic continued her meteoric rise this season, recording the fastest winning performance ever at the Nationals in taking out the 100m in 11.23 seconds. The performance bolsters Basic’s World Ranking and chances of selection for Tokyo.

Ben Buckingham was the hot favourite for the men’s 3000m steeplechase, but with an inspired performance it was James Nipperess who took victory in the dying stages of the race with a determined sprint to the line. It was Nipperess’ sixth national title but perhaps the most valuable: combined with the 8:30.13 personal best he set, it secures valuable World Athletics Ranking Points. The Sydney University Athletics Club athlete should now sit 33rd in the rankings, for the 45 person field, while Buckingham will remain in 26th position.

Australian record holder Kathryn Mitchell is on the path to her third Olympic Games after claiming the national title in 63.34m, defeating world champion Kelsey-Lee Barber (61.09m) in the process. Mitchell doesn’t (yet) have the qualifying standard and is one performance short of having a World Ranking, but one suspects that given another competition or two, one or both of those problems will be solved.

Henry Frayne took out his maiden national long jump title with a 7.97m leap. He has a strong world ranking that is strengthened further by his win, making selection in his third Olympic team a strong likelihood.

Looking to gain selection in their first Olympic teams are Christopher Douglas and Alex Beck. They respectively took out the 400m hurdles and 400m titles, with Beck adding the 200m to the trophy cabinet also. Douglas ran a swift 49.50 seconds to win by almost two seconds. Beck clocked 46.41 seconds to take victory by half a second ahead of Steve Solomon. Solomon’s best race of the championships was his heat, where he cruised to a 46.82 second victory, but that shouldn’t detract from Beck’s performance, especially as he clocked a swift 46.14 seconds in his heat.

A summary of results is presented below.