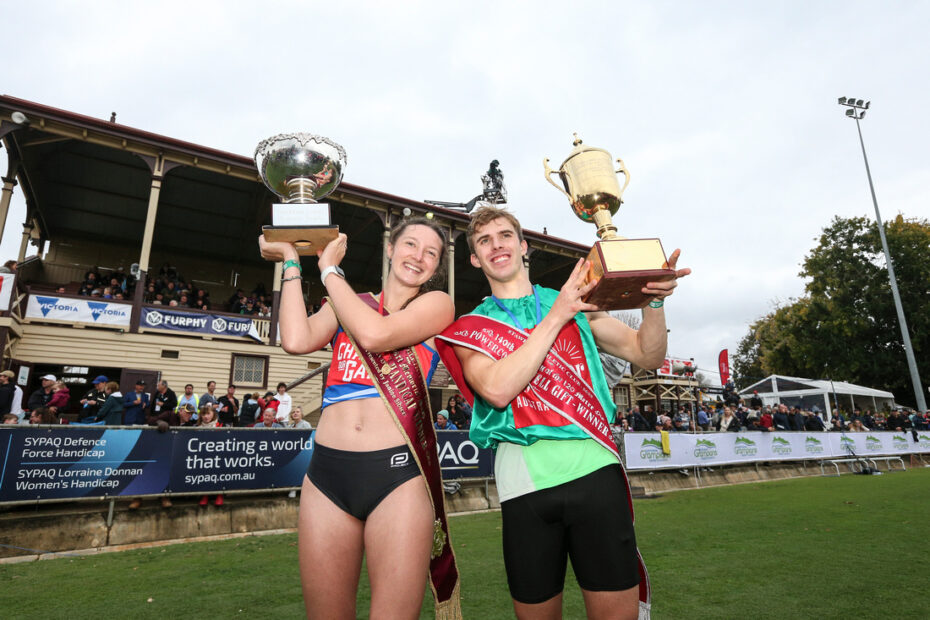 Kerr’s performance on the wet Stawell track was almost 4% faster on a ‘rate per metre’ measure than he ran at last year’s Gift or any time since then (except for his Stawell heat and semi this year). He also had a mark one metre more generous this year (9.25m this year compared to 8.25m last year). Part of that difference was a 0.5m ‘lift’ in his handicap under a Victorian Athletic League policy of rewarding athletes who are already performing better than their peers, when they win a lead-in event. In Kerr’s case, this was the Maribrynong Gift last month, which he won by 0.14 seconds.

“He surpassed what I expected him to do, he ran out of his skin and I wasn’t expecting that. I can’t fault a thing he did and he is an absolute joy to coach.”

The women’s Gift was a more befitting display of the concept that pro running should produce a close contest. In a blanket finish where the entire field was separated by just a tenth-of-a-second Cara Bull (6m) took line honours in 13.75 seconds

“It was such a close race, the other competitors in the final were all truly amazing.”

Clare de Salis (8m) was a close second in 13.79s just ahead of Mia Gross (0.75m) on her 21st birthday, who finished one-hundredth-of-second further behind.