Qualifying for the Tokyo Olympics 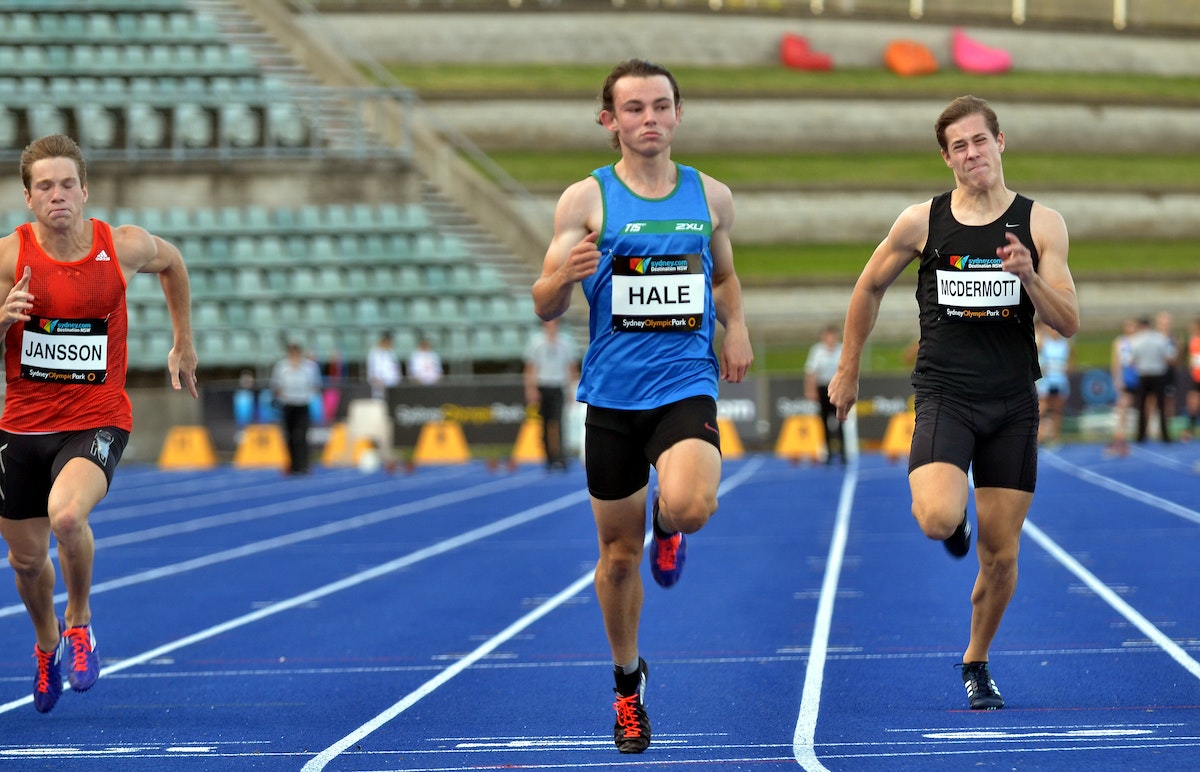 Last week the IAAF Council announced the qualifying process for the 2020 Olympic Games in Tokyo. It has caused quite a lot of interest and misunderstanding. We'll try to break down this complex system as best we can in plain English, with a focus on the implications for Australian athletics.

The new qualifying process seeks to fill about half of the quota-sized field in each event through athletes achieving an entry standard, with the remaining places based on the new IAAF World Rankings.

Nothing has changed with respect to the number of athletes a nation can enter into an event (3), provided all of the athletes have qualified through either of the means available.

The entry standards are much more difficult to achieve than previous qualifying standards. As a sample, the 100m requires a 10.05s (men) or 11.15s (women) performance, compared to 10.16s and 11.32s respectively for the Rio Olympics. However, only half of the expected 56 athletes in each - so 28 - are expected to qualify based on achieving these entry standards. The remaining athletes in the field will qualify based on the IAAF World Rankings.

What are the IAAF rankings?

As a high level summary, these are rankings based on complex statistical calculations that reward athletes for both their performance and place in a number of competitions over the year, with a higher weighting for places achieved in more significant competitions (as determined by the IAAF).

How is a Performance Score determined?

There are two factors that make up a single Performance Score: the Result Score and the Placing Score. These are simply added together.

The Result Score is based on the IAAF Scoring Tables for Athletics (statistical tables in a 368 page PDF available here). They are similar to scoring tables used for the Decathlon and are based on detailed statistical modelling and revision every three years.

One of the characteristics of the Scoring Tables is that they are progressive i.e. the same margin of improvement scores an increasing number of points as performance improves. Put more simply with an example, a tenth of a second improvement in the 100m from 10.20s to 10.10s sees a larger increase in the number of points obtained than an increase from 10.30s to 10.20s, recognising that the former improvement is a more difficult and valuable achievement.

Although they are progressive in nature, at the elite end of the sport the tables look relatively linear, as the below graph shows. 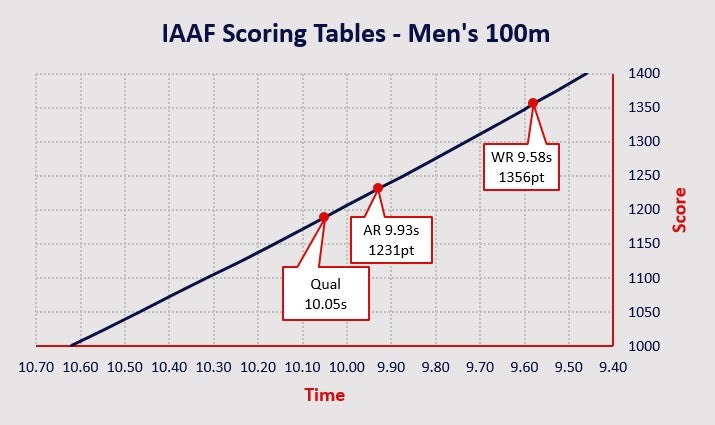 There are also various amendments to the Results Score to take into effect wind conditions i.e. additional points for performances into headwinds and deductions for tailwinds - meaning that wind-assisted performances can still be considered for Result Scores, Performance Scores and ultimately Ranking Scores.

Placing Scores are the most significant new element of the qualifying pathway. Points are obtained based on a combination of the placing obtained and the category of competition in which they are obtained. A win at an Olympic Games or World Championships in more valuable than a win at a National Championship. In fact, according to the Placing Score table, 12th place at a World Championships is equivalent to a win at a National Championship. We've represented all of the Placing Scores graphically below, with the tables available on the IAAF website. 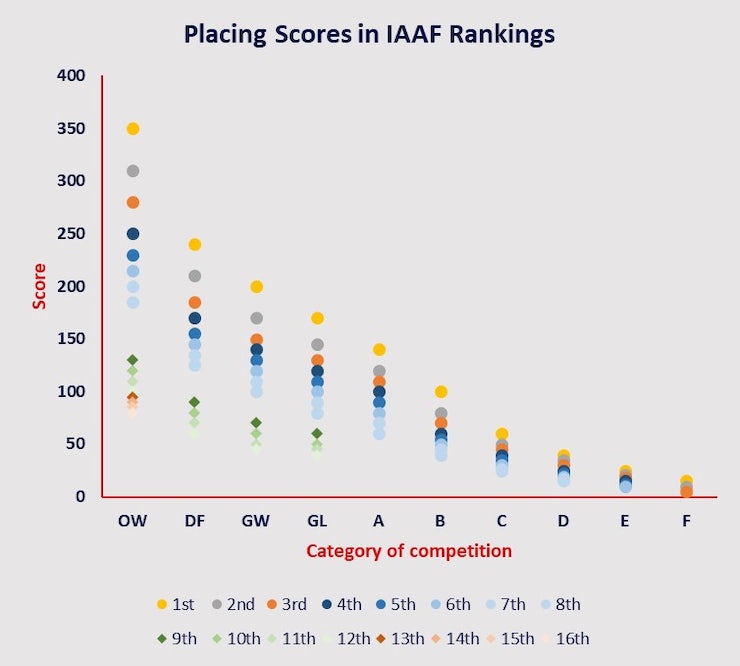 What do all of these categories of competition mean?

An exhaustive summary and calendar is available on the IAAF website, but here's a snapshot of what it means for meets Australians often compete in, if the meets they have the same classification as this year.

OK, but what does all of this actually mean?

It's best illustrated by example.

One available example is the IAAF's modelling, which Letsrun obtained for a recent article. We've broken that down for Australian athletes on our Facebook page. It shows, if the World Championships were held at the end of last season, which athletes would have qualified based on rankings.

Ranking Scores average around 1150 points for men's events and 1115 points for women's events, but are as high as 1197 points (men's pole vault) and as low as 1024 points (women's 20km walk). Caution! This modelling was done before the IAAF World Rankings had any real relevance... if qualification for championships is based on it, it is likely that athletes will start to 'chase points' and the Ranking Points required to gain a quota position would likely increase. 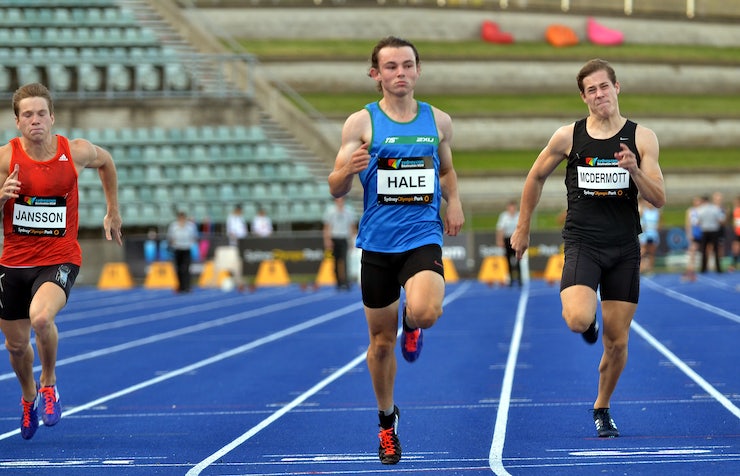 As a more granular example, let's look at the 100m and Australia's top sprinter Jack Hale. Let's assume he'll need 1200 points to qualify, rather than the current 1173 cut-off from the IAAF modeling. Who knows, more than 1200 points may be required?

By itself, a run of 10.01 seconds gains a Performance Score of 1200 points. Well, if he runs that just once, he's under the 10.05 seconds entry standard and the World Rankings aren't relevant for his qualification.

To obtain an average Result Score of 1200, Jack's five performances could come from a combination of the below meets in the following times:

Which isn't an insurmountable task against roughly the same competition in each of these meets. Here's his current Performance Scores, prior to this weekend's Perth Track Classic.

What might athletes wanting to qualify via IAAF World Rankings now consider?

Competing at Oceania Championships. Australia hasn't traditionally sent a full strength team to the Oceania Championships. It's now an event every athlete that can't meet the tough IAAF entry standards should be looking to compete in. A win there is more valuable than a win at the Commonwealth Games. The current July date doesn't assist and would arguably be better placed just after the Australian domestic season - perhaps something that can change in future years.

Prioritising Oceania Area Permits. Aside from the Canberra Festival of Athletics and Queensland International Track Classic (more important for point scoring than Nationals), easy points are available for any athlete wanting to put in a good performance at NZ's Porritt Classic or Graeme Douglas International. At the next tier down (category C), the Oceania Invitational in Townsville in June and Fiji Grand Prix in July are soft targets - you'll get the same Placing Score for winning those as winning Sydney Track Classic, the NCAA Championships or good European meets like Heusden, Karlstad or Padova.

But competing Indoors is more valuable. IAAF World Indoor Tour meets like Birmingham or Madrid are Category A competitions, so tours like those in February of Ryan Gregson, Jordan Williamsz, Stewart McSweyn are worthwhile investment to build points in case they don't meet the entry standards.

Nationals. Good points are available at Nationals if you perform. However a tactical distance race is a waste of time. The Nationals' relevance  as a selection trial will remain limited unless 4 or more athletes qualify in an event, or if a retrograde mindset of not selecting all eligible athletes was reintroduced.

Competing in the United States. Very few meets have Area Permits (Category B & C). The calendar is incredibly Eurocentric. There's more opportunity in Asia than the US.

Getting into good quality competitions and then performing well, is even more important than previously.

Waiting, watching until 29 June. That's the close of the qualification period and its not until then that half of all Tokyo Olympians - and likely most Australian Olympians - will know if they've made it. Even then, there's up until 6 July that athletes might make the grade if other nations don't select all available athletes obtaining places from their IAAF Rankings.

Does this make athletics better?

It certainly doesn't make it any simpler.

It might see better competition as athletes chase points in more a limited number of competitions. A flow on effect may be consolidation of meets.

We can expect a lot more analysis ahead and the IAAF are working on improving their website to make information more available.